Ok so that’s a pretty famous song by the Dead Kennedys but we have just had one as a family and I have to say….it was one of the best holidays I have had in a long long time. The stars aligned for a moment last week and everything came together ;  The Americans called me and said they had an emergency repair that needed attention at the Port Of Sihanoukeville ( where you may remember we look after the Radiation Monitors ) and could I get down there pronto please ? Water Festival was on in Phnom Penh and all the random madness that goes with it and then Rob was leaving the country for 3 weeks to watch the cricket in South Africa so “use the house if you want” . So what’s a guy to do ? I went home last Monday night and asked the wife ” sweetheart what are you doing for the next few days ? Fancy a Holiday in Cambodia?”. Her smile said it all and we were packed and ready to go in an hour. We planned to leave the next morning at sparrows fart as I had to be on deck at the port by 9am but great minds think alike and we said to each other almost at the same time…..LET’S GO NOW !! So we loaded the new ride and off into the night we went… 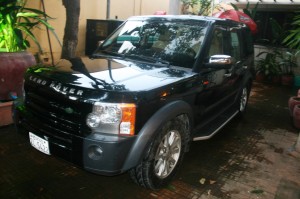 We hauled arse down to Sihanoukville via Road 3 and Kampot which made the going very easy. Dinner at Bokor Mountain Lodge around 830pm ( Rusty keyhole was packed and out of food ! ) and then we finally arrived around 11pm with everyone on the back passed out. Normally I would never drive at night here in Cambodia but the Discovery has lights that illuminate for miles. We unpacked everything and after Grace had a quick explore ( “wow look at this and this and this and this !!! ” )  we all headed for bed exhausted but safe. The next day I arrived nice and early at the Port and met up with one of my crews who just happened to be coming of Song Saa Island ( we are doing the electrical fit out and gensets over there ) and we then worked on a faulty boom gate for about 45 mins in the sweltering heat. I swear the Port facility is about 10 degrees hotter than everywhere else in Cambodia. Problem solved, I then headed up to the hill overlooking the town to take some GPS co-ordinates on one of the antennae my boys had inspected earlier in the week for our other project and it was then back to the house where I found everyone in good spirits. Leakhana and I went to the market and bought half the seafood on offer and the rest of the day was spent swimming and eating. 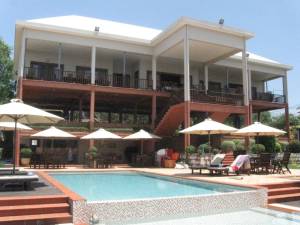 Our home for the next week

Wednesday came around and by now Grace and I have a little routine. Around 9am after a hearty breakfast of bacon and eggs we start singing our little song ” swimming swimming we’re going swimming !” and off we go downstairs to don the trunks and the floaties and jump into the glorious pool. Over the next few days Grace will perfect the “deep dive” where I push her right to the bottom of the pool to retrieve sunglasses or a cricket ball, the “big bomb”, the black flip, the dive and her swimming skill in general. She really is a little otter and fearless in the pool and she starts to go positively black in the sun even though we are slip slop slapping religiously. Karma is our ever present life guard running around the pool with a big smile and a woof woof ! That afternoon I have a surprise for the family and we load up and head to Riem Navy Base where the Cambodian Eagles ( we are a major sponsor ) are playing a team off a visiting Royal Australian Navy ship. The family are gob smacked as we drive up to the base’s gate are saluted and promptly ushered through like royalty. I park up in the shade and we set up our esky and bamboo picnic mat and settle in. It is damn humid but I am not playing, just paying, and a cold Beck Bier is at hand so its all good. Grace loves the football and declares early ” daddy I want play football !” and I have to stop her running onto the field more than once. Karma is having a ball and Leakhana chats with other wives. At half time we head to the beach for a quick swim and then we notice the Navy kick boxing team has started training and Grace runs over to participate. 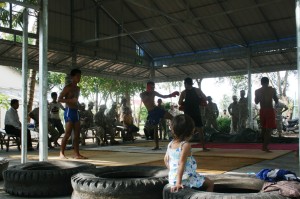 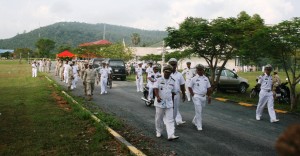 Is that Richard Gere I see ?

Getting ready to run on

The following few days were spent in a routine of sleeping ( which came easy at the end of every day I can tell you ), day swimming, tramp bouncing, snookering,bbqing with visitors , night swimming under full moons, more eating, cruising around town, cocktails etc etc. Speaking of cocktails one night I took Leakhana and her sister up to Chez Claude’s for what I thought would be lovely sunset drinks . If you visit tripadvisor you will see gets great reviews. Well…..God what a freak show ! After parking in a car-park full of broken down boats and weird ( staff ? ) housing you find that the famous cable car does not work so you have to walk up a brutal hill underneath all these random buildings and bungalows. You finally get up the main building and walk throughout a weird, dusty lower entry foyer and then up some ill-lit stairs ” anybody home ??”. We are met by a terse looking French/Vietnamese lady and when I ask if they are doing cocktails she says ” only rum and orange juice”. That’s wierd – the bar is fully stocked. There is no music and no lights on and the whole place is very Twilight Zone. I couldn’t wait to get out of there but feel I should order at least one bottle of beer so we drink up and escape as soon as we can for the more refined Sokha Beach Resort. Avoid Chez Claude’s at all costs. On arrival at Lemongrass@Sokha I find I have lost a flip flop but the staff kindly lend me a white pair and we are soon heading into the bar area with the deck overlooking the sea. No….wait,…..make that the deck and bar IN the sea. They have had a big storm and the whole place looks like a bomb has gone off ! They have also lost their famous white sanded private beach. Just as we finished our first drink the waiter told us that it was happy hour over in the main bar so we booted over there only to find HH was over but they had a special on a house cocktail so we ordered a few and sat down. Across the bar were three 15 year old Khmer freshy boys who were slamming cocktails and playing extremely loud and hardcore rap over the hotel sound system using their iPhones and no-one was stopping so I can only assume they were related to the owners . Quite amusing to be in a 5 star resort with everyone sitting down to the buffet and all you can hear is ” bitch,fuck,nigga,whore” etc etc. 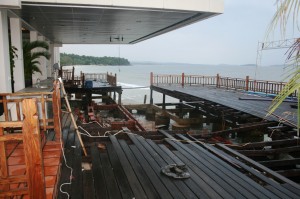 The Lemongrass deck ; should have used more concrete fellas..... 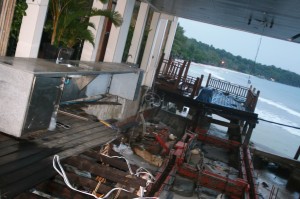 A few months ago this beach was about 25m wide 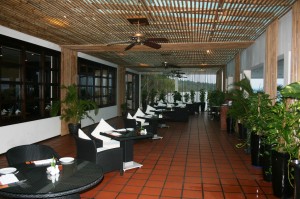 Lucky the restaurant was still in place

The girls loved it.

Rob’s house is just the best place in Cambodia to be with kids and family as there is so much to do . Phalla and Tra came down for a few days with their kids and it was just an awesome week of chilling out and chatting into the night whilst kids played and slept. Even the nannies had a great time. Eventually though all things must come to an end but considering the initial plan was only a few days…we got a full week out of it. Yesterday we packed up with military precision and headed back to Phnom Penh via Kampot for lunch and the first thing Gracie said when she got to our front gate was ” no daddy I don’t want to go i nthere I want SWIMMMING !” . Next time bubble! 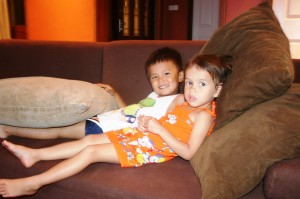 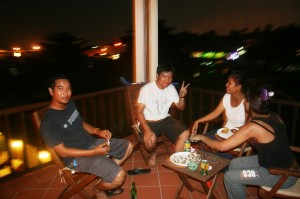 5 Responses to Holiday in Cambodia