I am not a huge cricket fan but I have always liked Shane Warne. Even when he was embarrassingly and publicly texting half of the world’s big titted trollops with crude booty calls, it was still hard not to like the guy. WARNIE is ( or was ) your classic Aussie boy made good who loved a meat pie, a ciggie and a cold beer ( preferable all at once ) and wasn’t afraid to call it like he saw it. He got paid massive amounts of money for throwing very tricky balls at batsman and that money usually ended up flowing out the door of whatever mansion he was holed up in a river of champagne, VB and law suits.

Warnie, who in the past has been happy to admit to taking his mum’s diet pills, and has been a proud spruiker of surgical hair treatments, dismissed reports that he’d had a facelift, saying that moisturiser was the secret to his crease-free complexion.

Lately, Warnie has teamed up with ubber-trollop and over the hill Liz Hurley who is famously so good in the sack that her ex hugh Grant snuck off to the US and went and shagged a $50 hooker on Sunset Boulevard and got caught – according to a report, the attention of a policeman was aroused by Grant repeatedly pressing the brake pedal of his BMW . Whoops !

But now the news is in that Hurley has told the UK’s Easy Living magazine: “He has his own set [of beauty products] now. He uses the girls’ ones – they’re much better, as I’m sure you know. Every guy I’ve ever known has used my beauty products and continued to do so.”

So now the reports are out that he has his own line of beauty products aimed at guys but based the line is based on products for shielas. WTF !?? The reporter who writes the article has the tagline ‘Where do you draw that line between what’s OK and what’s not, for a man to use on his face?’ Well…..in my own little bit of Warnie Style….let me put my spin on it;

For a start, anyone dude who uses moisturizer daily is a poof.

Eyeliner or wrinkle tightening shit of any kind? A poof.

Exfoliating ,avocado infused droppings from the anus of a Tibetan squirrel ? NONCE !!

Product of ANY kind in the hair – poof.

You get the general gist of how I feel about metro-sexual homosexuals yeah ? Now…don’t get me wrong…I am not THAT much of a redneck. I like a nice clean shave with a Gillette disposal razor and some Gillette lemon/lime shaving foam and after that I am going to splash a bit of Armani after shave on. Sends the sheilas ( and my wife ) mad.  But thats the limit of it. Takes about 5 minutes tops.

So Warnie….in the words of the great Ronny Johns…HARDEN THE FUCK UP. I heard a radio interview the other day where you were saying you have not changed and are still the Warnie you were all those years ago. BULLSHIT. You are fast turning into a nonce of epic proportions. 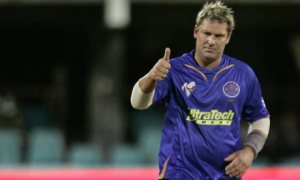 Warnie THEN. Fat,flipping spinners and famous.

This entry was posted in DAILY NEWS, SILLY STUFF. Bookmark the permalink.

7 Responses to Warnie you big POOF