Arrive at work this morning to some vehicular mayhem in the car park of our depot. Initially we thought that the security guard and some of his friends had taken two of the cars for a joy ride. The truth was far more amusing. In search of somewhere away from mosquitoes and a little cooling AC, one of the night guards decided he would start a truck so he could nap in the front seat with the engine running the AC. The result ?……… 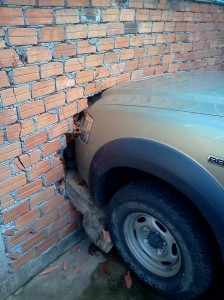 We figure he has jumped into one car, started it and accidentally stuck it in reverse whereupon he then flew backwards and slammed the truck behind him before then putting it in drive and lurching forward ans slamming through the brick wall. Imagine his surprise. Luckily brickwork here is about as sturdy as cotton wool so when I backed the car out of the wall…we were stunned to see there was very little damage. Some scratches but that was about it. The guard is now with the policeman and his family have been called to make cash donations to the repairs. to his credit…he actually hung around and admitted to it where most would actually just disappear to the provinces.

4 Responses to An expensive nap.