Gracie turned 3 yesterday so of course a party was in order. Leakhana was left in charge of buying the present and what does a Khmer mother with a three year old who is about to go to school buy her daughter ? A new schoolbag and water bottle ? Some educational books ? A new dress ? No….

A Chinese Play Station rip-off for $50.

I shit you not.

In my wife’s defense, she did it because she has seen me get increasingly agitated as Grace commandeers my android touch phone and swipes her way through it to play games, all the while changing all my settings and deleting much needed applications. There were mentions of a TV for her bedroom ( ” no….a child needs to sleep when they go into their room” ) and her own phone ( ” I will divorce you if you buy our 3 year old a phone”) so in the end ….the PSP won out.

Agus watches on as Grace the tech-kid jumps in

We decided on a home made cake and Leakhana turned out a fine looking orange sponge cake with chocolate sprinkles and cherries on top. She rang me at about 3pm and said she had failed miserably but when I got home at 4pm I told her I thought the cake was awesome as it had been made with love AND it was the spitting image of all the wonky cakes my mum used to make us all. I would not have swapped it for a glitzy ABC cake for all the tea in Cambodia. Family arrived as did William and Ice with son Alex and we settled in to a few beers,red wines and sizzling hot plates with prawns,squid,beef and pork all done over the $10 butane grills. Just a great way for a group to eat. 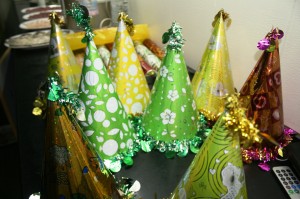 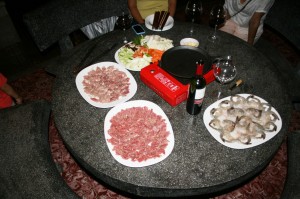 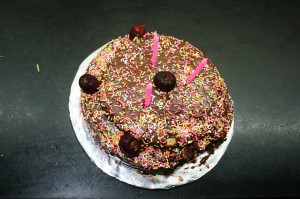 This entry was posted in FAMILY, GRACE. Bookmark the permalink.