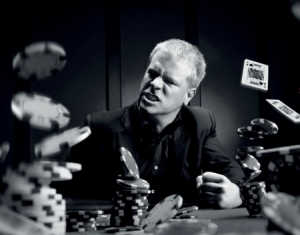 Had a wild little poker ride on the weekend. Fri night I got seduced in to playing an early game up at Naga by Shane after having a few beers with him and David on the Infinity rooftop. I figured with the Luck of the Chinese New Year on my side I would have a lash. My very first hand I decide to stay in pre-flop with 3/5 off suit. That should be an indication of how *hic* loose I am feeling. The flop comes down 246.*DOINK* . I end up slow betting the turn and river and then lay out a $50 bet as a finale and the remaining player calls. I have the straight and take a $70 pot. Nice first hand ! It’s all down hill from there and I end up dusting $200 in a about an hour.

The following day Shane has a home game with early starters being Mike, Fritz, Shane and myself. It’s a nice slow $20 game that sees Shane raking chips his way. I am playing much tighter and smarter than the previous night and I soon start pantsing Mike of his stack. Once twice, three times. Fritz is next and then Curran,Rachael ,Ritchie and Duncan arrive and I start in their stacks. By 10pm I am up $110 and tired as hell so I call it a night happy to have recouped half of my bank from the night before and played  much better poker.

This entry was posted in POKER. Bookmark the permalink.