We have just returned from a great mini-summer holiday down in Kep with the Gager and Brown families. Here is how it all panned out ;

Although I was due to head south on Friday, last minute arrangements meant on NYE I had to stay up in Phnom Penh to attend our end of year client and staff bash. Some 200 invites were sent out requesting the pleasure of everyone’s company at a beer garden in Toul Kork and with stories of previous year’s events turning into drunken boxing matches, I was on high alert. We have over 100 young guys working for us and as young lads do, they like nothing more than a cold free beer or 20. I was out at the venue from 2pm onwards overseeing table set-ups and band placement and ensuring Rob’s beloved Heineken was chilled down sufficiently. Balloons were blown up and existing excessive chintzy Khmer restaurant decorations were taken down and stowed.

Come 5.30pm the boys started turning up in droves. All showered and shaved and dolled out in full freshy attire, they were clearly ready to party and fell on the cold jugs of beers like men that had crawled through the desert for a week and had finally found an oasis of fresh water . It took about 30 minutes for the party to get in full swing and the band helped things along immensely. Management wives were in attendance with children too and whilst Sophaun and I greeted everyone outside individually, everyone inside had a fine time. After much dancing and jocularity, stumps was eventually called around 10pm and I headed over to Sharkeys with Rob because it seemed like a good idea at the time but on arrival decided I was way to drunk to be out so jumped a moto home. Happy *hic* New Year !!

The next day we headed to Kep with a car full of family and things were going fine until about 30 minutes out from arrival. A headache of epic proportions came over me and I started feeling seriously ill. We had stopped at a roadside cafe near the airport for rice porridge on the way out of the city and my stomach was now doing somersaults. Sweat starting beading up on my forehead and having to wait an hour for our bungalow to be cleaned did not help matters at all. As soon as we were given the key I headed to the bathroom where I vomited so violently I thought my stomach lining had landed in the bowl. I then crawled over to the bed and it was there I spent the next 24 hours in a world of pain. Vomits, cramps,chills, hots, thirsty and the headache…..my god. It was like someone had split my head in two with an axe and it hurt like hell to move my eyeballs in any direction. I was even groaning….whimpering….out loud every 20 minutes or so !! It was TERRIBLE ! I thought for sure maybe I had Dengue Fever or some such. At any rate all I could do was listen as all the kids ran around in the garden outside ( with the other families our group numbered 16 ! ) and had a great time.

The next day despite a horrid night “sleep” on the world’s shittiest hard foam mattress I was feeling somewhat revived though the headache was still in the background. I managed to get a pot of tea and some bread and jam into my stomach and we then formulated a plan to head out to a secret beach for the day. Trucks were loaded with fresh seafood and iced drinks, portable bbqs, music,sunscreen and all manner of other necessities and our convoy rolled out towards the Vietnamese border around 11am . Some 45mins later following a secret map we arrived at the secret coast and initial reactions were mixed. There was a rather grubby little village at the end of the secret road where we parked and then we could see what looked like a very nice clean sandy beach stretching away from the village which was at the end of the beach but there was no road along it. Damn. Not looking forward to lugging all our crap 300m along sand, we loaded up Chris’ new Triton 4×4 ute and after a quick scout along the beach to ensure there were no puncture hazards, we soon arrived at a huge stunning coconut grove right on the beach which was invisible from the village hence the “secret” !! 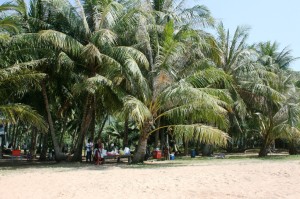 Where did you spend New Years Day ?

The water was just beautiful and clear and blue and there was a mad rush as kids and parents donned swimmers and ploughed into the ocean. Whilst Chris and Paul started drinking for Cambodia, the kids ran around collecting starfish and crabs and corralling them into the “aquarium” they built on the beach. It was just great seeing little Grace being able to explore and enjoy a beach in all its glory. She is now at that age where she has to see and feel everything and she is not in the slightest bit squeamish. She fearlessly picked up huge sand crabs and carried them around and as usual just loved being in the water. The women meanwhile cleaned and prepped all the seafood for lunch and set up camp under the trees before heading in for a dip themselves… 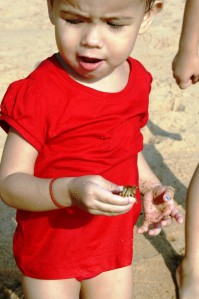 Grace and her pet crab. 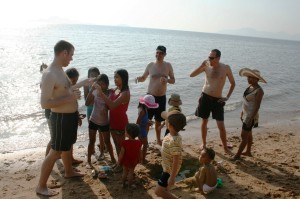 And me ? I had a quick dip and then,with my headache and sheer exhaustion from a crap night sleep creeping up on me, I made for the nearest hammock which is where I would stay in an in-and-out-of-coma stupor for the next 2 hours or so. I could not eat any lunch and could only scull water . Still……there were worse places to be recovering. Sometime around 4pm Ang and Paul and Dan and various others we knew arrived for sunset and with Chris and Paul G providing the afternoon’s entertainment ( by now they are steaming drunk and on the Vodka tonics ), a fine time was being had by all.  Around 5pm we called it a day and we headed back into Kep to shower and get ready for dinner. Grace was absolutely out for the count after a huge day at the beach and we left her in the care of Nek and Pek while we headed to Breezes for some oysters and pasta. My hunger was by now slowly returning and it was good to eat something finally.

The next day we went out to the block to check on our trees and surprise surprise all the bamboo cages were still intact, none had been thieved and the trees seemed to have grown somewhat ! The acacias especially seemed about a foot higher. I checked on the progress with the cutting of fence poles and to my complete dismay they have mostly been cut too thin. This despite me being very clear and actually showing the neighbors a pole to use as a guide.

” But there are only a few big ones like that in the forests so we just cut the other ones….”

“Well…..when I say I want big ones and show you exactly what I want, you should ring my wife and talk to her first. Sorry….I am not paying for poles that look like toothpicks.  ”

They agree I can take what I want when it comes time. *sigh*

Chris heads back to Phnom Penh with his family and Paul and I take our families up to Kep Lodge for a day of swimming,lunch and ice cream. The kids have a ball in the pool and I am feeling better. That afternoon we decide to take a drive up into the hills behind our bungalows and we load up my ute with a gaggle of kids who all hang out of the back tray. Up up up up we go and we soon have amazing views over the coast and the back-blocks of Kep. On the way home we stop at the beach and the sunset is just killer. The fishing boats are headed out to work for the night and the dragonflies are thick in the air. Dinner for me that night is Pizza whilst everyone else heads out for Seafood and Paul comes down with belly rot and has to bolt home to the sanctity of his own bathroom.

The Kep Lady ; Waiting for her husband

Sunset on the beach

The final night I got a reasonable sleep and awoke fresh the next day finally on top of things. We packed up and had breakfast and headed back to the big smoke. As the girls slept in the car I could not help but thing how similar it had been to a summer holiday up at the farm. Fresh air,the beach,sun,seafood,lots of kids screaming and laughing, a dog.

This entry was posted in DAILY NEWS, FAMILY. Bookmark the permalink.