The drive-thru zoo ,The Hunchback of Tonle Batte and lunch….finally. 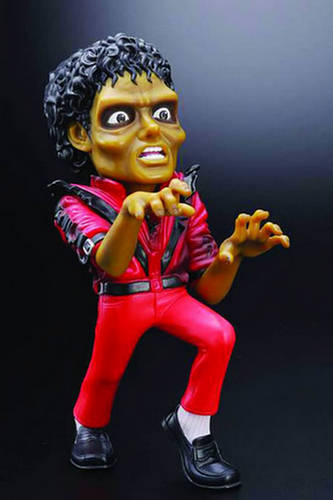 With a spare day up my sleeve mid-holidays, I decided it was time for a family outing and having never been to the Phnom Tamao Zoo, that was where we all     ( including dog ! ) headed. It is about a one hour drive out of town and the dirt road up to it is a bit surreal. It’s like that Michael Jackson thriller video where all the ghouls are slowly walking towards you. Except they are not ghouls, they are the district’s poorest souls and most of them are hunched over and 70 years old +++++. Some of the most wizened and strangest old faces I have ever seen. As we drove out I saw a Lexus SUV tearing towards us and every time they went past a beggar the window opened and a flurry of 100r notes came flying out . I hate to sound like a dickhead but it was rather amusing.

Welcome to the jungle

Having paid $5 for myself ( oh me of the white skin ) and 2000r (0.50c)  each for Leakhana and Grace we motored on in and find that the zoo is deserted apart from a few gardeners / keepers and we soon pick up a self-appointed guide who peddles his little pushbike furiously in front of us pointing out all the animals. With Grace leaning out the window oooohing and aaahhhing and Karma on high sensory alert and me with the SLR slung around my neck, it was the next best thing to being on safari in the Kalahari. We saw incredibly athletic and vocal Baboons, gentle deer ( god damn it where is my cross bow when I need it ) , buffalo,sun bears,birds and then….the tigers. Man…the tigers. Back home in Australia from memory you stand about 50ft away from the animals. Here in Cambodia they are ( luckily ) just over an arms length away. Simply amazingly majestic animals with eyes that suck you . There were two in one enclosure that were placidly chilling out in the shade and then there was a big male in a another enclosure that was pacing up and down the fence and growling and itching to get out and devour us all whole. Grace was perplexed, I was transfixed and Karma….well…she was plain shitting herself in the back of the truck. Last stop was the elephants which Grace loved and whilst she got up close and personal I hung back with Karma as the smells were driving her crazy and I did not want to start a stampede. 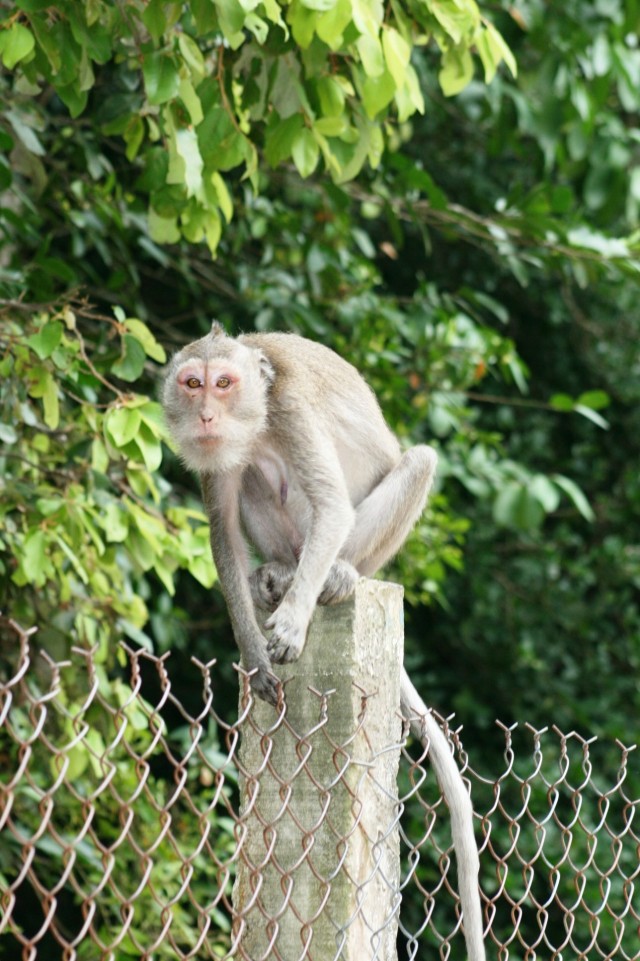 Monkies galore. This one was called Gavinmac. There were so many of them I thought they might jump in the back of the truck and kidnap Karma.

This did not come out so well but the signs read PLEASE BE QUIET and DO NOT FEED and inside the enclosure was a khmer dude sleeping in a hammock !

My mouth is bigger than yours. This was the chilled out tiger.

This was the gnarly tiger. 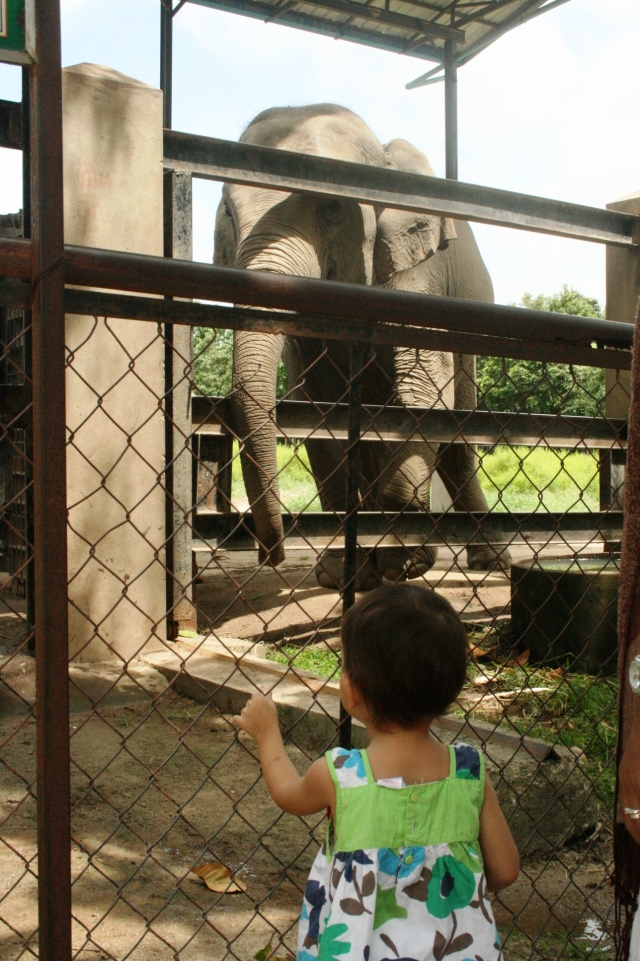 So…the zoo is well worth a day trip. It is very clean and quiet and the animals are well looked after which is great to see. It would make a great place to mountain bike for a day and the only thing it lacks is a restaurant or cafe. If they had one overlooking the elephants enclosure it would be a great spot to stop and relax. On the way back down the road I drove at warp speed so as to avoid the legions of haunted souls and we decided to head out to Tonle Batte for lunch. What a mistake that was.

Tole Batte is a small lake and it also has a historical site somewhere near it.We paid $3 to enter the “park” while we were changing money to get our tickets we were immediately accosted by the hunchback of Tonle Batte. This twisted little annoyance wanted us to eat at his restaurant and would not take FUCK OFF for an answer. He insisted on riding 10 ft in front of the truck and first opportunity I got I overtook him and left him eating my dust. Anyway as we hit the lake we are accosted by every food vendor on the road. “EAT HERE EAT HERE BUY THIS BUY THIS”. I am so hungry I am not in a good mood and all I can see are dilapidated shacks set over muddy water that look about as inviting as  a trip to the dentist. I look in the rear view mirror and The Hunchback is still following us so I am tempted to slam on the brakes and watch the look on his face as he slams into the back of the tuck. After 15 minutes of this we have both had enough and Leakhana suggest we head back to Phnom Penh for lunch so I turn the car around, give Mr Bumpy Back one more spray and off we  go.

Just a were are about to hit the main road I noticed a sign for a restaurant / picnic park and a quick glance inside revealed a very orderly looking establishment so we decided to give it a shot. Best call of the day . We drove straight up to a shaded cabana next to a big pond filled with fish and were met by a delightful young lass who greeted us and fawned over Grace and Karma. We were soon tucking into the most delicious sweet and sour pork ribs, some tom yam soup and a few cold beers whilst we swung in hammocks. With no-one else in the place ( apparently they get very busy on the weekends and I don’t doubt it as it was lovely ) it was a perfect way to rescue the disaster that was Tonle Shithole. This place is a way better lunch option than Kien Svay and we will definitely go again.