Last night it was absolutely pouring down here in Phnom Penh and I finally got around to sorting out a very nice room we have in the back of our villa that overlooks the …..well…..not much really

Anyhooooo……. It still makes for a nice man room.

After that I was pretty hot and sweaty so I flicked the AC on, sliced up some hot-dogs,popped a cold beer,grabbed the clicker and took Karma into my new “den”. I decided the lesson would be LEAVE IT and as she was hungry( which is actually the best time to train as the dog is motivated for the reward ), I thought this was going to be interesting.

Karma is given the LIE DOWN command and hand signal 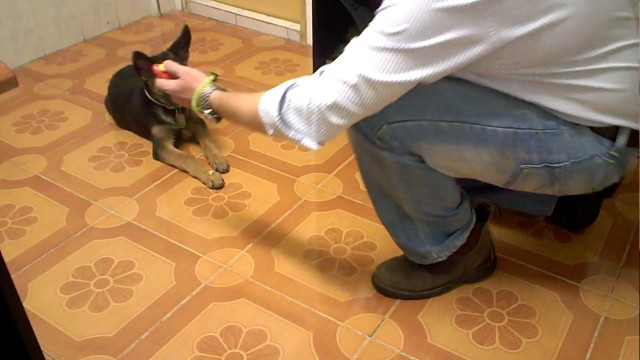 For many dogs and their trainers this command takes time,patience and repetition – especially when using the actual food reward as the object for leaving.Without a word of a lie Karma got it basically first time. I dropped a piece of hotdog on the floor and said LEAVE IT in a deep voice and she made a small move for it and I was ready to cover it with my hand but when I corrected with another verbal LEAVE IT she backed straight off. 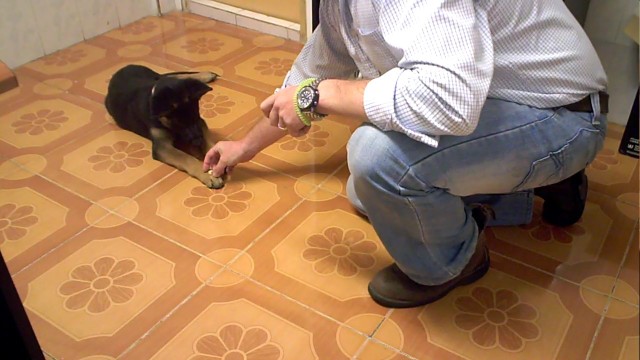 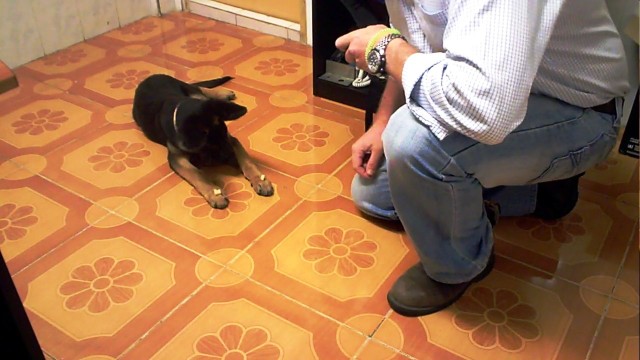 Hot dog on two paws and LEAVE IT

For the next 6 – 10 commands the hotdog was tossed out in various positions in front of her and she left it every time so I decided to ramp it up a bit. I put Karma in the perfect down position ( like the sphinx ) placed a hotdog bit on her right paw and told her  LEAVE IT. She made a half arsed attempt at getting it but again, with correction, Karma ( all of 11 weeks ) left it alone.We did this a few more times and then I decided to ramp it right up….

I placed hotdog treat on BOTH paws

, said LEAVE IT ! ( well….leave THEM lol ) and Karma excelled. She just sat there patiently looking at me. All of this was achieved in about 15 minutes. I then tried getting the hotdog placed on Karma’s nose but that was just too much for one day ! I called in my wife and daughter thinking there was no way Karma would concentrate with everyone in the room but once they sat down Karma was good to go.

I gave Karma her commands SIT (click& reward), DOWN (click&reward), LEAVE IT with both hotdogs on her paws (click&reward ) and she was perfect!! My wife was suitably impressed “She is a bloody smart dog” ( and that coming from a Khmer is high praise trust me ! ) and I allowed Grace to give Karma her bonus treats to finish the session which my daughter loved doing.

We then played some fetch as a reward and with a LET GO (click&reward) she was soon also letting go of the fetch toy 70% of her returns.

To prove it was no fluke, all these photos are taken in my office today in her lunchtime training session which was not much fun for me as I have a raging flu.

I need a bumper sticker for my truck that says “GSDs ROCK ! ”

1 Response to LEAVE IT!