You know that saying “The Terrible Twos” ? Grace is just about to hit them and I can tell you the change from sweet little cherub to rambunctious little heathen has been swift and merciless. Leakhana was at wit’s end the other week and threatening to leave so I had to come up with some ideas to control our little monster. Thankfully we do not live in the PC west where you cannot discipline children and we have a bit more freedom to work with so I managed to come up with the following small tweaks to Grace’s bedroom.

Grace has learn to climb and she can now get up and over her rib effortlessly. Now…the entire top perimeter of the crib has been reinforced with a metal frame that is connected to a car battery. When she tries to escape the crib, she is given a gentile electric shock  which will discourages her from attempting to climb out of the crib again. 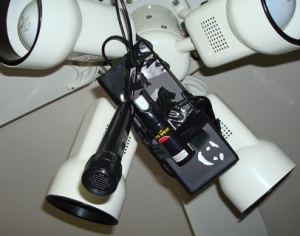 This is a little mobile that I invented called “The Lullibinator.”  I Simply hung it above Grace’s crib and the microphone detects when the she is crying. If the crying reaches a certain decibel level, the box  sprays a calming mist of pepper spray into the crib. It will hopefully train Grace not to cry in no time! It worked great on her the first time she started yelling. I had to dilute Leakhana’s can of  CS pepper spray that I bought her in Bangkok to about 2% which is practically harmless. If i need to I will upgrade. I have decorated the Lullibinator with friendly smiley faces which seems to comfort your Grace but only really before she gets sprayed.

Grace is thirsty ALL THE TIME. I have gotten a bit tired of the endless trips to the Kitchen in the middle of  the night and am sick of stubbing my toe on all manner of kids toys. We had a bender the other weekend and this tequila bottle was left over. I fashioned a kind of nipple thingy with a straw and now she can help herself to 1litre of tequila smelling water  . She loves it .

So there you go…..amazing what a bit of ingenuity can solve.

This entry was posted in GRACE. Bookmark the permalink.