Khmer New Year is a huge holiday for all Khmer. A good chance for city based workers and residents to go home and catch up with family in the country and a time for celebration,eating,dancing,drinking and generally having a great time. The day before it started we held a small gathering for all the boys here at work and they welcomed the cold beer and sangers before jumping on their motos and heading out.

The boys at work -heads on them like mice

Cold beers all round

Team Leader Sophaun lays down the laws 1.No drink driving ! 2. If you are on the emrgency crew list KEEP YOUR BLOODY PHONE ON !

For the last couple of years we have enjoyed the super quite environs that Phnom Penh offers during KNY. Everyone in the city racks off to the provinces and the city becomes a ghost town with tumbleweeds rolling down the street. This year we decided to get out of town and head for coast and when my boss heard I was headed to he very kindly offered us a room at his house. It took us about 4 hours to get down there by the time we fought mad traffic exiting the city and then stopped for lunch along the way and we finally arrived to an amazing house and a stifling hot afternoon. The house is perched up on Victory Hill and has a commanding view of the Gulf of Thailand. With swimming pool(s),bar(s), motorbike(s) ,a games room,playground,trampoline and flat screens everywhere….there is literally something for everyone . The house is absolutely beautiful and testament to what can be achieved in this country with commitment and attention to detail.

A drink at the bar ?

How about a bounce ?

A nice stroll in the gardens perhaps ?

Well....you could do all of the above or you could just suck piss in the pool with the boss !

We wasted no time in getting into the pool and Grace scored her first pair of floaties which she absolutely loved. Within minutes of getting them on she was giggling and splashing around and with Rob’s daughter Skye alongside her, she had a ball. Within 15 minutes she was comfortably going under the water for long periods and within a couple of hours she was standing at the edge of the pool, counting to three and stepping off into the abyss with a big smile on her face. With a couple of huge tubs full of sold beer and wine next to the pool and a bbq sizzling away, a fine first afternoon was had by all. Rob proved unbeatable on the pool table and the two of us soon headed out on the town via the seedy little dirt strip that is Victory Hill and then down on to the Russian money-laundering bar that has a huge Antanov aircraft suspended in a hanger. No-one else int here except a grumpy waitress who served us both warm beer. Very odd indeed. The next day was pretty much the same .More swimming, more drinking, more meat on the bbq and we were joined later in the day by Brad,Nat,Tanya and their kids. After many more Heinekins we all headed down to the beach for dinner at Tranquility resort and one of the best $7 Australian steaks I have had here. I then hokked Leakhana up with nev, Pearsay, Danecha and Simon and they all headed out to the bars and I crashed out early.

Our final day ( yesterday) was spent at the beach with everybody in tow. Rob and I scouted out and reserved two tables in advance and then around 11a.m we loaded up the cars with eskies and bbqs and toys for the beach and kids and off we went down to Hawaii Beach. Cars and families were arriving on the minute every minute and the beach was soon in full swing. With seafood aplenty for the girls and 4inch thick pork chops for the boys, no-one went hungry and rivers of red wine soon got the better of at least one of our bunch. Later that afternoon it rained torrentially which cooled things down nicely and after the beach we again retired to Rob’s games room for pizza and the AFL before heading out on the town for one more large night.

Party on the beach 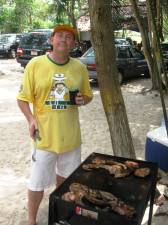 Simon's ride. About says it all ! 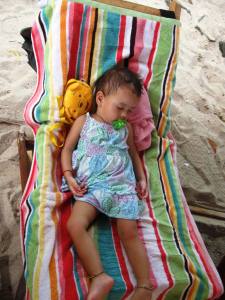 Too much for Grace 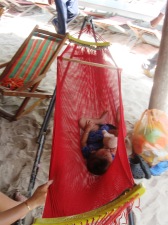 Too much for Skye too !