Back here I did a review on the great documentary Planet B Boy. This morning I got a little giggle when I read about this old B Boy who has been rippin’ the system and forgot about it all for his moment of glory. You go gramps ! 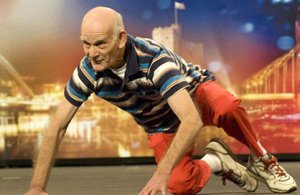 Yo Grandmama ! Check it one time boooooooooy

A British pensioner has been told to pay back thousands in disability pension payments after he was seen breakdancing on TV show Britain’s Got Talent.Fred Bowers, 74, amazed judges and the audience with an energetic routine that included spinning on his head.But officials were tipped off about the performance and launched a probe into Mr Bowers, who claims he has a bad leg, the Daily Mail said.

The government department responsible for the payments found Mr Bowers did not meet the criteria and was being overpaid.The former soldier has been ordered to pay back 3000 pounds ($5231).Mr Bowers denied he’d been found out by the TV show, arguing there was a government mistake that had to be corrected.

“I was overpaid, but it was a mistake by the social,” he told the Mail.”I’m not a benefits cheat – I would never do anything dishonest. There was just a mistake, and I was getting more than I should have done.”I always said I would pay back anything I was found to owe. I was worried I would end up in court, but it doesn’t look like that’s going to happen.”

Mr Bowers was reportedly “a cult figure” on the dancefloors of local clubs even before his TV show appearance, the Mail said.

This entry was posted in SILLY STUFF. Bookmark the permalink.