A visit to Mak’s house

When I first moved to Cambodia I soon met a Khmer guy who runs a very successful auto garage called Mak. Over the years we have become good mates. He sold me my first Jeep Cherokee and I often swing by his garage these days for a cold beer. His grandmother runs a shop from the front of his garage and she has a huge chest freezer which has the coldest beer in town at 75c. Anyways……for a long time Mak has been asking me to go out and visit his land just outside Phnom Penh with him and with 5 days off for my birthday and a freshly serviced Xr250 at my disposal I figured the time was right.

On Saturday at 3pm Mak and his wife jumped in their Camry and I revved up the bike and within 20 minutes we were turning into the driveway of his plot. The drive out was pretty gnarly as the land is out near the killing fields and the traffic along the highway that leads out there is horrendous and light rain made the road slick as shit which did not help. However, the trip was well worth it as Mak’s place is a real delight and a veritable tropical paradise.

Mak bought the land about 12 years ago and it was totally barren. He and his green-thumbed wife have since planted enough fruit yielding trees to keep every market in Phnom Penh stocked with mangoes,bananas,papaya and chilli for the next century or so. They built one house 10 years ago which is right on the river at the front of the block and Mak is currently finishing house number two which is a very interesting little dwelling. Part western chalet, part khmer timber house, it has some very nice elements like the terrazzo staircase with sunken fish pond underneath, and then some hideously chav khmer elements like perspex rain eaves and blue mirror windows ! Struth . I softly gave Mak some advice on how to finish the house off cheaply but tastefully and then we took a walk around the property.

The block is set right on the berm of a small river ( not sure that it is called ) and I guess it is about two hectares. Mak has wisely built paved walkways around the property so you can walk through the lush areas without sinking up to your ankles in rich alluvial mud and there are features abounding like the old boiler, the bridge, the swing, the various fruit glades and the wonderful chill out huts perched right on the river. Speaking of the river, Mak’s place has flooded completely twice since he has owned it and he reckoned that a bit more rain that night would make for number three. All his neighbours land was underwater and it wasn’t looking good. Speaking of his neighbours, we took a walk to the end of the little road and there I was met by an old gent of about 80. Naturally, he offered me  plot of land 30x30m right on the river ! The price ? $5000 ! Sounds great. Then Mak says “There are no papers and really the Government owns it”. Er……so how can he sell it. ” Oh no problems, he owns the land behind it so it is as good as his”. Er…pass. Still, the old guys was very nice and we had a chat for a while. He was of course thrilled to be talking Khmer to a big white boofhead.

As the rain started we sat under Mak’s new house and had a few cold beers and it was soon time to head back to Phnom Penh before dark. All in all a really nice way to spend the afternoon and I will probably take Leakhana and Grace back out there when the water subsides as I think Grace would love it out there.

I’ll let the photos tell the rest of story…….. 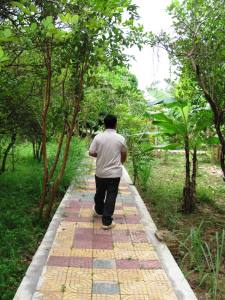 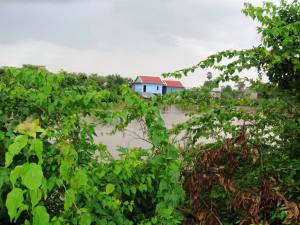 Across the ( badly swollen) river 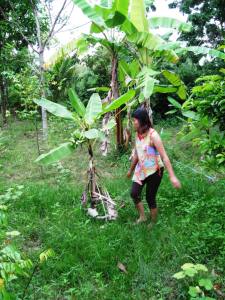 Mak and his pond 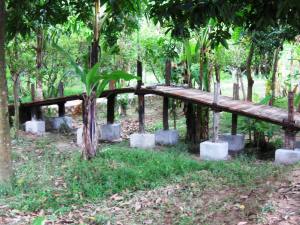 Bridge over the river Mak 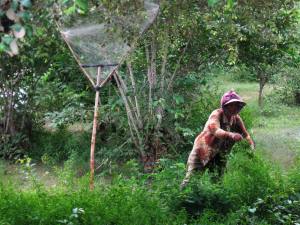 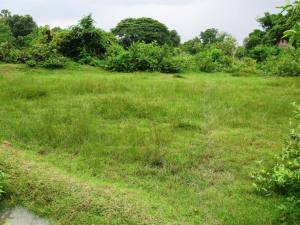 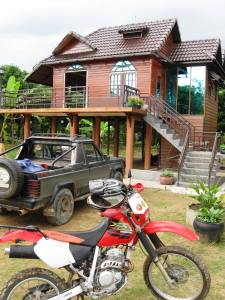 1 Response to A visit to Mak’s house