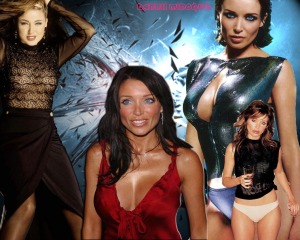 Dannii Minogue has revealed how she got hooked on anti-ageing Botox injections while her sister Kylie was battling breast cancer (OH YES – AND WHAT PROMPTED YOU TO HAVE YOUR TITS,CHEEKS,NOSE AND ARSE

DONE ?).The 37-year-old singer and TV host says she fell into a depression after Kylie was diagnosed with cancer in 2005.”My sister was sick, then my best friend died soon after – I felt I’d been hit by a wave,”( I WISH THE TSUNAMI  HAD WASHED YOU OUT TO SEE YOU TROLLOP ) she told The Sun newspaper.”I couldn’t deal with the stress. I couldn’t deal with having to look at my face ( FUNNY-I CAN’T LOOK AT YOUR FACE EITHER !! ).”It was a personal thing of having to get through a lot of sadness.”At first, it was something fun I tried, then it became a necessity.”

Dannii, who is a judge on hit British TV talent show X Factor, recently revealed that she was turning her back on Botox so more natural expressions could return to her face.”I don’t need Botox now and don’t want it. Life is just so different now,” she said ( WILL YOU BE HAVING YOUR TITS TAKEN OUT TOO ? ) .Dannii has been dating former British rugby league star Kris Smith and says he could be the one to start a family with(OH GOD-PLEASE DON’T PROCREATE ).”I guess at my age I have to start thinking about babies at some time,” she said.”But to be honest, I’m just enjoying being so wildly in love and being so happy. He is the one.” (  I think you should marry Kyyle Saandilands…)

This entry was posted in SILLY STUFF. Bookmark the permalink.