I have written in  the past about my addictions to series such as The Wire, The Shield, Dexter and Boston Legal. Some time ago Mark gave me a few videos but before I cold watch any of them Grace broke our 3 week old DVD player. Bugger. I have let some 3 months or so slide without replacing the unit and on Saturday morning I could handle not having a DVD no more ! $49 later I had a sleek new silver Sony player installed and was ready to pick up on my pro couch potato tour again.

Pixie ( The Shop Manager ) is also rather annoying and her tit job seems to have sucked the brains right out of her..

One of the DVDs I have been dying to watch is LA INK , a show about a Tattoo shop set up in West LA by the heavily inked and raspy voiced Kat Von D, one of the world’s pre-eminent female tattoo artists. This show has been running for some time but it is always on too late for me too catch so on Sunday after a long morning of doing stacks of chores like washing doormats, hanging photos and mopping stairs, I  summarily dismissed the family ( ” go out and play – you all watch far too much television and should be outside “), loaded the DVD and cracked a cold Zorok.

LA INK is a great show if you are into tattoos. Part reality show, part documentary and part sob story, it isn’t exactly riveting watching but there are some elements to it which I just love……and hate. For a start….I can take or leave Kat Von D. She has an annoyingly raspy voice and is quintessentially LA using the words Rock-Out, Dude,like…. fer sure, totally, rad,insane,bitchin’ etc ad infinitum etc in every sentence. She constantly goes on about ” like fer sure now I am a business woman it is so rad but totally stressing me dude” and is a weee bit OTT for me. Plus her work seems to entail portrait after portrait after portrait in black and white which is fucking boring ! Although I will say the tat she did for the guy from Anthrax of Angus Young from AC/DC was totally rad dude. Her best friend Pixie ( The Shop Manager ) is also rather annoying and her tit job seems to have sucked the brains right out of her. In one episode Pixie lets her tonsillitis get so bad her glands look like she has swallowed a banana sideways ( leave it gavinmac ! ) because ” I totally don’t want to take time of my rad job and I love Kat sooo much I would like…. fer sure…. die for her”. Which you almost did you idiot. Mind you…everyone that walks into Kat’s shop is “my best friend” and the more famous they are – the more of a greasy welcome she gives them.The fact that she is good mates with Steve-O from Jackass  ( and let him tattoo her ! ) about sums Kat’s zaniness up.

Upon starting her shop ( after being fired from her job in Miami -presumably for being annoying and getting divorced – also for being annoying ),Kat hires one guy and several women and these are the characters that SHOULD take a back seat to her but actually in my opinion, they make the show. Corey is a legendary free hand black and grey artist who is a super laid back tattooist,painter,drummer and a father to three. He does awesome work and can sketch straight onto people’s arms without stencilling. Kim is also a very laid back chick but my absolute favourite is Hannah Aitchinson. Hannah would be in her 40’s comes from a family of famous inkers and not only has some of the most fantastic ink on herself  (her left arm is to die for ) but she also does the most incredible colour tattoos I have ever seen. Her work is sheer genius and to watch her take someone’s half baked ideas or semi-crappy sketches or ideas only and then turn them into masterpieces is really something to watch. Hannah’s vivid art just jumps off the skin and the look on people’s faces when they see their finished work is priceless. This woman is simply amazing and I would give my right arm to get my entire left arm done by her. I don’t think I would even have to give her anything to go on other than a few key words. She truly is an artist. 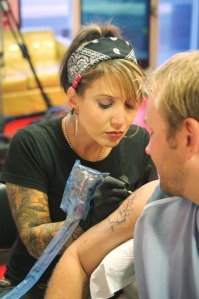 I'd give my left arm if she could do my right arm !

LA INK also concentrates on the stories behind the people behind the tattoos and some of their tales are pretty moving. A lot of them have gone through incredible adversity and family devastation or huge life change and are getting inked to immortalise those moments and I can relate to that having been inked on my way over to Cambodia several years ago. Obviously they pick out the tear jerkers and it makes for an interesting plot addition over and above a show simply about tattoos. The other thing I like about the show is the glimpses into LA life. I have heard all about LA and have had alot of friends living there but I have never been so the bits where they get out and about are really interesting.

All in all the show is predominantly about tattoing BUT it is a good show to pass some time ( I watched the entire three seasons over a few hours and several beers ) and it has certainly inspired me to get my sleeve done sooner rather than later. I have tickets to Bangkok in February but I may not be able to wait !

This entry was posted in REVIEWS. Bookmark the permalink.