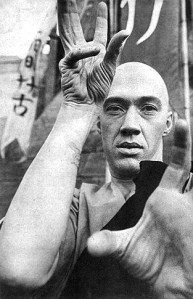 The Legengary Carradine as Kwai Chang

Thai police are today reportedly investigating whether Kung Fu star David Carradine died during a sex game gone wrong.The 72-year-old actor, who also starred in Quentin Tarantino’s Kill Bill films, was found hanging in a Bangkok hotel room wardrobe with a rope around his neck and other parts of his body.Police first said his death was suicide because there was no evidence of a struggle in the room and no bruising on Carradine’s body.

But there was also no suicide note, Britain’s Daily Telegraph reported, leading an unnamed police officer to raise the possibility the actor’s death could have been an attempt at auto-eroticism.Carradine was in Thailand to shoot a film called Stretch. A spokesman for the film’s producer also said the star’s death “could be accidental”.

A spokeswoman for Carradine’s Los Angeles agents said the “circumstances surrounding his death are still unknown”.The actor left behind wife Annie Bierman and their three children. Family spokeswoman Julie Nathanson said the family was “devastated”.”There will be no further comment until more information can be confirmed,” Ms Nathanson said.Carradine’s manager, Chuck Binder, paid tribute to the actor, telling the BBC: “He was full of life, always wanting to work … a great person.”

Carradine was the son of prominent actor John Carradine and part of an acting family that includes brothers Keith Carradine and Robert Carradine.He was born on December 8, 1936, during Hollywood’s “Golden Age” of cinema, though he first entered showbusiness through musical theatre on New York’s Broadway.While best known for his role as the fugitive half-Chinese Shaolin monk Kwai Chang Caine in the 1970s TV drama Kung Fu, Carradine had a long a varied career in film.He appeared in Martin Scorsese’s Boxcar Bertha in 1972, and played legendary folk singer Woody Guthrie in the 1976 film Bound for Glory, which gained him a Golden Globe nomination.The following year, director Ingmar Bergman called on Carradine to play a wandering out-of-work American Jew in poverty-struck Weimar Germany, for the movie The Serpent’s Egg.Swedish master Bergman was said to have entrusted Carradine to take the role for his commanding physical presence, recalling that of his father.

In the following two decades Carradine continued to work, but failed to find success outside of cult B-movies, as he was beset by the use of drugs and alcohol.In the mid-1990s, he reprised the role as Kwai Chang Caine in Kung Fu: The Legend Continues, which found home on US TV for a further 60 episodes.A huge fan of his B-movie work during the 1980s and 1990s, director Quentin Tarantino called on Carradine to play the title character in the 2002-2003 revenge-action-epic Kill Bill and Kill Bill II.Carradine’s work on the movies earned him a fourth Golden Globe Best Actor nomination.

Married five times, most recently in 2004, and the father of two daughters, Carradine was still working at the time of his death.