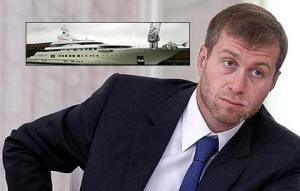 Russian billionaire Roman Abramovich has lost one of the yachts in his sizeable personal fleet in a game of poker, a Russian newspaper reported.

The popular daily Moskovsky Komsomelets said the oligarch lost the $US500,000 ($A674,627) yacht while playing poker in Barcelona, which he was visiting to watch the London football team he owns, Chelsea, in action.

Abramovich’s yacht collection, thought to be worth hundreds of millions of dollars, has been dubbed The Roman Navy by Britain’s press.

The Russian newspaper said his poker habit had become a sore point between him and girlfriend Daria Zhukova and that the billionaire, who made his fortune in Russia’s sell-off of state assets in the 1990s, had instead turned to gambling online.

This entry was posted in DAILY NEWS, POKER. Bookmark the permalink.